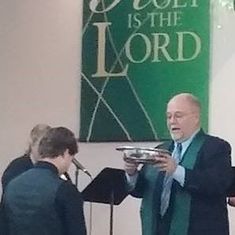 Pastor Glenn S. Rice joined Port Orange UCC on March 1 as our new settled pastor.  He grew up just north of the Lehigh Valley in PA. He has been a lifelong member of the UCC. He worked for 23 years at Maier’s Bakery as their Director of Information Technology. During this time, he and his wife Susan moved to Reading, PA.

A late educational bloomer, Rev. Rice graduated from Albright College in Reading, PA in 1999 with the degree of Bachelor of Science; majoring in Business Administration. He then received his Master of Divinity from the Lancaster Theological Seminary in 2004.

His first call into parish ministry was at Zion’s Stone UCC in Northampton PA.  He was ordained in October of 2004 at his home congregation; Community UCC, St. Lawrence (Reading) PA.  He continued to serve at Zion’s Stone UCC from 2004 to 2016 after which he and his wife moved to Florida.

Pastor Glenn is happily married to his wife Sue for 36 years. Sue is a mother/baby RN at Florida Memorial Hospital in Winter Park. Sue enjoys reading and arts & crafts. They are the parents of son Kurt and daughter Jill. God called Jill to heaven five years ago where she is an angel watching over us.

He did not decide to become a minister, rather God decided he was to become a minister.  He had an extreme sense of "call" into Christian Parish Ministry and found it impossible to say no to our loving God. God has been preparing him; opening his mind, allowing him to burst out of his somewhat narrow, confined box.  Since his calling he has learned from many in the academic world as well as his many mentors and congregation. He continues to rely on knowledge from his past vocations including: Computer programmer, Systems analyst, Department manager and Auto Sales.  His concrete thinking worked well in the business arenas and education while his free thinking abilities have led him through sales and theological studies. His life, as well as his immediate family’s lives, has been sharpened and refocused to follow his calling and spread the good news of Jesus Christ.